What makes Monarch Butterflies so Unique?

The latin name for Monarchs, Danaus plexippus, means "king". Monarchs are a 6-legged insect, although they generally keep two of those legs tucked up beneath them. Monarchs are the only insect that makes an epic, transcontinental journey of up to 3,000 miles in just 8-10 weeks. They smell with their antennas. They use compound eyes to find the flowers upon which they nectar and a proboscis to eat. They have taste receptors on their feet. On their wings, there are millions of air-filled scales which aids in their buoyancy. They weigh less that 1/10th of an ounce. Females can lay more than 250 eggs in a single day. Though not the most effective flyers, Monarchs can fly at a speed of 30 miles per hour in still air, even faster with a tail wind. They can fly up to 265 miles in a single day. They know this because Monarchs tagged in Pennsylvania have shown up the very next day in Virginia! It is believed that Monarchs use the earth's magnetic field and the position of the sun to aid them in migration.

The fourth generation, sometimes called the "Super Monarchs" are born during August, September, and October. These are the Monarchs that make that legendary trip, often with pin-point accuracy, back to the Oyamel Fir Forests in Mexico. The fourth generation lives for 6-8 months. They are able to store large fat reserves and they postpone mating. The are aided in their journey by riding "thermals" Thermals are long columns of warm air which travel to the south and west in late summer and early fall. Monarchs get up into these currents and are able to just glide, therefore, using less energy. 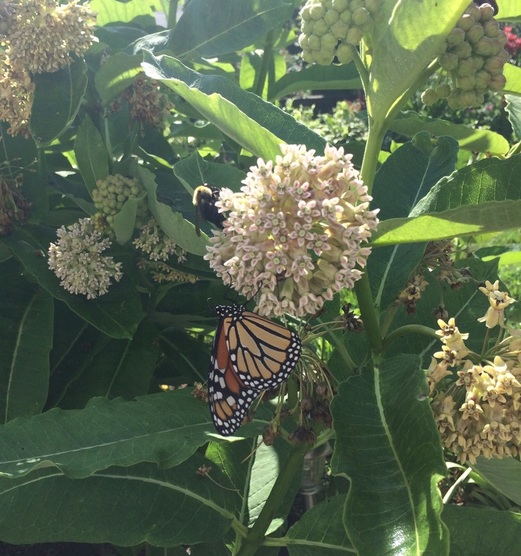 Why are Monarch Butterflies at Risk?

In August of 2014, a legal petition was filed with the U.S. Fish and Wildlife Service (FWS) requesting Endangered Species Act protection for the Monarchs and their habitat. The petition period closed in March of 2015. The FWS has 9 months to study the issue and decide whether to propose protection. In February 2015, the FWS launched a $3.2 million dollar initiative to restore habitat, develop native milkweed strategies, , support schoolyard and pollinator habitats, and to provide education and outreach. Critics say this is not enough to even restore 1% of what has been lost. In May of 2015, President Obama launched a national strategy to mitigate honey bee loss, increase the Monarch population, and to restore habitat.

Monarchs split their round-trip migration between generations - their life cycles are intricately synchronized with the milkweed upon which they lay their eggs. Scores of wild milkweed species are fast disappearing. Why is this? The primary culprits are genetically modified organisms (GMO) and the use of glyphosate (Round-Up).

Crops (our food) have been genetically modified to have herbicide tolerance. 94% of the soybean crop that is planted is herbicide tolerant. 89% of the corn that is harvested is herbicide tolerant. In the last decade or so, there has been an increased demand for ethanol, which comes from corn. Of course farmers want to get as much yield out of their fields as possible. The farmers literally spray glyphosate from fence post to fence post, killing everything, including weeds, wildflowers, and milkweed. Over 180 million pounds of glyphosate is sprayed on the fields each year. Milkweed can survive tilling, but it cannot survive the glyphosate. It is estimated that 165 million acres of milkweed habitat (1/3 of the Monarchs' summer breeding ground) is gone. Glyphosate is also used by utility and transportation departments. It is sprayed along utility lines, pipelines, and highways. which are also prime milkweed habitats.

It is no wonder why are Monarch, honey bee, and other pollinator populations have been decreasing at an alarming rate. There is less and less of healthy habitat for them to survive. We are poisoning them out of existence! If you want to help, there are some things you can do. Consider buying non-GMO foods. Look at your labels carefully. There are many companies that are proud of the fact that their products are GMO free. They get great satisfaction displaying this information on their products. You can also sign petitions. There are many such petitions circulating, which are easy to find online, against big chemical companies, like Monasnto (the maker of Round-Up) and Bayer.

This is a male Monarch on some verbena in my back yard. Males have thinner veins on their wings. They also have a black "dot" on each of their hind wings.
Proudly powered by Weebly